In Defense of Darwin 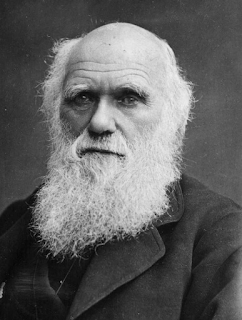 The impetus for this posting was the learning (with no surprise) that some Alabama lawmakers are trying to ramrod a new bill through State Congress which would allow religiously-minded teachers to spout Creationism in public school classrooms. Rather than simply rail about the prevalence of ignorance in my beloved home state and fling insults at those (buffoons) responsible, I decided instead to try to enlighten. With this posting, then, I may be considered an apologist of sorts for Charles Darwin and the “theory” of Evolution. To do that, I think I’ll invert the standard “inverted pyramid” of journalism and start building my argument from the bottom up, also risking a non sequitur or two by shooting down a few falsities that just bug me. Before the radfundies out there (Radical Fundamentalists, or “radfundies” for short) start breaking out their tar and feathers or preparing the stake whereat to burn my person, how about we explore a few facts, shall we? (With maybe an opinion or two of the author’s thrown in for ballast.)


First off, fellow Alabamians—and this may fall more under the heading of editorial than fact; even though I wholeheartedly believe this statement to comprise the latter, I can’t really PROVE it—PLEASE don’t be duped into believing that those politicos who are always pushing for this type of legislation are doing so out of spiritual conviction, out of a sincere devotion to God and their religious principles. They are devoted only to getting reelected, and they believe, rightly so, that if they can convince their constituency that they are a “man (or woman) of God” their chances to accomplish this are better. They’re not “taking a stand for morality.” They are pandering. They WANT you to believe that they are “holy” because they want your vote. Their intents are purely selfish. Is EVERY politician like that, you may ask. Surely they can’t ALL be fakes, right? There is an exception to every rule, I concede, but those exceptions are extremely rare and far between in this particular case. Politicians practice snowjobbery. It’s what they do. It’s almost EXCLUSIVELY what they do.


Fundamentalism itself is not something to which a believer should be a proud devotee. Why? Because it’s basically saying you’re not too smart. The Fundie movement began in this country in the early 1900s, when a passel of hardline theologians set out to strip the Christian Faith down to its bare bones, getting rid of centuries of dogma, reducing it to a more palatable form, easily swallowed by the common man. An Idiot’s Guide to Christianity, you could call it, and not be too far off the mark. “Here’s all you NEED to know,” they said. A simplified spirituality. This is not necessarily a bad thing, in and of itself, except that “simplifying,” as much as it can be synonymous with “clarifying,” can also be rephrased as “dumbing down.” Some things just aren’t simple, and trying to repackage them as such leaves a lot to get lost in the translation. By clinging to the strictest interpretation of the Bible or any other “holy” work, you are giving the impression, correct or no, that you prefer the simplified version because you can’t wrap your brain around the complex stuff. Don’t insult yourself. If you prefer the Fundie way, ask yourself why that is. Is it just because it’s easier?


By this point, a percentage has gotten angry and stopped reading. For those still with me, you have my thanks.


Okay, that dispenses with the “opinion” parts of the lecture. Now for the facts.


Number one: The Bible is not and was never intended to be a history textbook. It is a work of poetry, and thank goodness for that. As someone who has edited textbooks, I can tell you firsthand how dull and dry they are. Hell, every school kid knows that. The Bible is ART as much as it is an historical chronicle. The myriad writers of the Scriptures collectively known today as the “Bible” weren’t concerned with nailing down hard facts like dates and such. They were concerned rather with enlightenment, with capital T Truth. The lessons of the Scriptures are moral rather than literal. They teach about the nature of God, about the nature of humanity, and about the relationship of one to the other. If the impetus had been of setting everything down explicitly for some sort of historical record, a lot more effort would have gone into nailing down the whens and wheres. The prophets, poets and sages of the Scriptures were instead trying to sing to us. They wanted us to FEEL. If you want cold, dry facts you need to look elsewhere.


Number two: God gave human beings their intellects. He would not have done so had He not intended for us to use them. All our sciences, then, come from God. As a former professor of mine once said, God is nothing if not absolute truth. Therefore it can never be wrong to seek the truth.


Number three: The Hebrew word for “day” does not just mean “day,” as in a 24-hour day. It can also mean “epoch” or “era” or some such. Therefore those who insist on biblical inerrancy need not abandon the first creation story in Genesis. An alternate interpretation of the text, then, could read: “During the first period of time, God created the [fill in the blank]” and be equally if not moreso factual.


Number four: Following on the previous, there are in fact TWO separate creation stories in Genesis, not one. A careful examination of the text reveals that the second chapter in Genesis is not simply a continuation and an extrapolation of the first. It constitutes an altogether different creation narrative that was collected and included alongside the first. The first chronicle lines up quite nicely with the fossil record, if one lets go of that whole 24-hour day thing and accepts a more flexible timeline. The second story focuses on the creation of humankind specifically. “From the dust of the earth,” the passage reads. Guess how our current scientific theorems state that life first originated on this planet. From inanimate chemicals in some puddle of primordial ooze. Might not “from the dust of the earth” be simply a poetic way of stating the same?


Number five: We need to dispense with that whole “Evolution is only a theory because it has not been proven” thing. This arises from a misunderstanding of the nomenclature. In scientific terminology, something is referred to as a “theory” if it made up of a body of facts, interconnected and interdependent, as opposed to a single “fact” or piece of data. Evolution cannot by definition be called a “fact” for this reason alone, because of the requirements of technical language. The truth is, folks, the evidence for Evolution is overwhelming and incontrovertible. Evolution happened. Period.


Number six: No, human beings did not evolve from monkeys. Evolution does not posit that they did. Rather it states that humans evolved from more primitive ancestors. As did monkeys. As did everything.


Number seven: Darwin did not originate the idea of Evolution. There were many learned men already debating it by the time old Charlie came along. He simply clarified it, put all the pieces together into a cohesive whole.


And number eight. And this is the big one. There is NOTHING in Evolution that says there is no God. Darwin even alludes to a “creator” in his seminal “On the Origin of the Species.” No, more than that. He doesn’t just allude to it; he says it outright. I’ve read it. Trust me, the references are in there.


Darwin was not an atheist. He did struggle with faith, yes, as many people do. He gained and lost his faith numerous times throughout his life. One doesn’t need Evolution for that to happen. I’ve gained and lost mine, and gained it again, and Science and scholasticism had nothing to do with it. Actually the more I learn about the complexities of life as revealed by Science the more the same supports my theistic beliefs.


Charles Darwin was not an atheist. We have his own words left to us to prove this:


“I have never been an atheist in the sense of denying the existence of a God.” –Charles Darwin


If even the primary proponent of Evolution, the man whose name will forever be linked to it, is able to reconcile “theory” with theism, we ought not have a problem doing it, either.
Posted by Wayne Miller at 7:41 AM