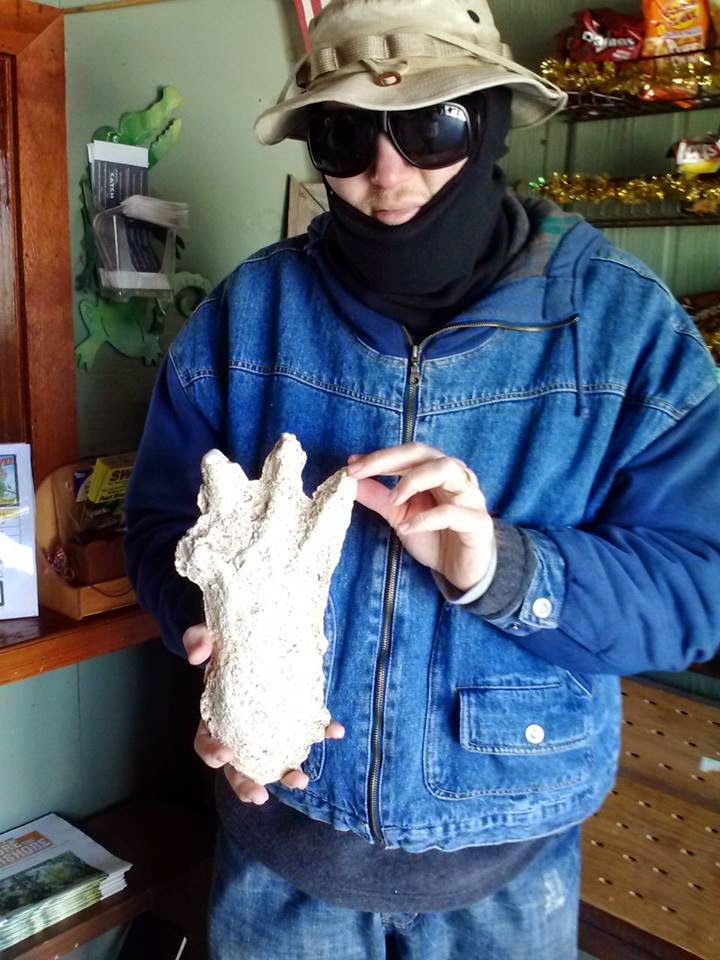 Y'all know that among the numerous hats I wear is that of the amateur cryptozoologist. (Cryptozoology, for those who don't know, is the science of studying and searching for heretofore undiscovered animals. Most commonly, animals like Bigfoot or the Loch Ness Monster. In other words, I'm an amateur "Monster Hunter." An amateur paranormal investigator, too, i.e. "ghost hunter," but this post concerns the former more than the latter.)
This is a photograph of your intrepid host holding one of the actual plaster casts made of the footprints of the Honey Island Swamp Monster, taken on my recent trip to said location in Louisiana. Sadly, the monster did not put in an appearance for me. I did, however, see a raccoon with an abnormal amount of personality. And the swamp is so beautiful, it's well worth seeing, even in wintertime when it's cold enough to need to wear your heavy coat and face wrapping and the alligators are all hibernating. And there are no mosquitoes out in the winter, either.
Hey, maybe the Monster was hibernating, too. If it is reptilian instead of mammalian--some have described it as such--this would make sense.
A lovely older woman from Australia, present when this picture was taken, commented that this cast resembled a crocodile's track. (Being from Australia, "Crocodile Dundee's homeland," as she described it, I guess she'd know, right?) She suggested that the print might have been made by an alligator. If so, though, it'd have to be one immense alligator, one as big as a full-grown saltwater croc. And that'd be a monster in its own right. Maybe even scarier than the shy,  hairy and/or scaly bipedal beast described by witnesses.
PoTAYto, poTAHto. Either way, keep your eyes open if you head into the Honey Island Swamp alone. And bring some treats for the theatrical raccoons.
Posted by Wayne Miller at 11:35 AM