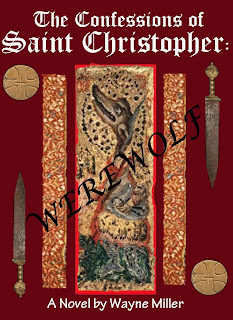 THE CONFESSIONS OF SAINT CHRISTOPHER: WEREWOLF
is now available for purchase! Just $2.99!

Millions of Christians the world over pray to him every day. Few of those, however, know the true history of the patron saint of travelers. Few know that this gentle, pious individual was, in fact, a Cynocephalus or “Doghead”—in other words, a Werewolf. The Confessions of Saint Christopher: Werewolf will, with its publication, change that. Written as an autobiography of the man, unearthed during a recent archaeological dig in Egypt and translated by the fictitious David Mayhew, PhD, who provides intermittent commentary, the manuscript sheds light on all the shadowed facets of Christopher’s life, chronicling his youth in Greece, where he is introduced to Christianity and first succumbs to his unholy curse; through his time spent as a pirate on the Berber coast; to his captivity in Rome, where he is forced to fight in the Coliseum against men, lions, crocodiles, and ultimately his own bloodthirsty nature; to his final martyrdom, facing down one of the dark gods of the old world, his own progenitor—Lycanon, the first Werewolf—with nothing less than the fate of all future children at stake.

The manuscript is something of a strange hybrid. It is at once an historical adventure, taking place in the bloody latter days of the Roman Empire; a Horror story, as Werewolf does battle with Vampire in the haunted depths of a primordial jungle; and a work of Dark Fantasy, as Christopher embarks on a trek in search of a lost temple defended by savage tribesmen, black magic and deathtraps. Swashbuckler, Sword-and-Sorcery epic, and Horror tale; the novel is all these things. Yet it is also inherently Christian. The protagonist is a man of deep faith, or rather he becomes such throughout the struggles of his life. At no point are the beliefs of the man who will become known as Saint Christopher offered up as an object for ridicule. Much the opposite, as Christopher’s faith is in the end the most necessary component of his heroism. (And lest any modern believers take offense, Dr. Mayhew is careful to explain that there were in fact two men know by the name “Christopher.” Both were noble and self-sacrificing. Only one was cursed with Lycanthropy.)

After two millennia, the true story will be told.
Posted by Wayne Miller at 10:06 AM