As promised, here’s the story of my history with vampires. It’s pretty funny, I’d daresay, except it wasn’t for me (at the time) and it wasn’t for my parents (and still isn’t to this day).


I was 5 or 6, something like that, and the wild imagination I’ve possessed pretty much from the womb was well up and running by that point. Also, I’d been raised on scary movies. One of the local TV stations (we only had 3 back in those days, one for each of the 3 networks) used to run old monster and Horror movies on Sunday mornings. “Science Fiction Theatre,” it was called. I’ve searched in vain for some record of that weekly program in the annals of local television lore but have always turned up empty-handed. The only trace of this beloved and oh-so-important introduction and indoctrination for me into the world of spooky cinema lies permanently imprinted in my memories. The first movie I can remember seeing was King Kong (the original, of course), and I can well remember the anticipation I felt when my mother told me that the next week’s offering would be Godzilla vs. The Smog Monster. Some others I remember seeing are Blood and Black Lace, Dracula vs. Frankenstein, and Mighty Joe Young. As these were old movies, they were “clean” and thus safe, and my parents quickly figured out that when they parked me in front of the TV set with one of these monsters or spooks to entertain me I’d sit quietly and rather harmlessly for the 2 hour duration. They loved Science Fiction Theatre almost as I did, I think, for that reason. They got peace. And I was in heaven. My love of Monster movies and the Horror genre was born of those Sunday mornings.

Knowing I’d watched plenty of scary movies and, instead of having nightmares, had found them entrancing, they thought nothing about it when the miniseries Salem’s Lot came on television one week and I wanted to watch it. This adaptation of Stephen King’s novel has both its admirers and detractors, but it will forever remain for me the scariest movie I have ever seen.

Remember the sitcom Alice? It was about a diner owner named Mel and several of the waitresses who worked there. I remember it, though not as clearly as I wish I did, same as with so many things from my earliest childhood. Alice got a spin-off series, called Flo, wherein the popular character from the original series went off and opened her own restaurant. (You may remember Flo for her trademark line, “Kiss my grits!” I have wondered if this character, played by Polly Holiday of Gremlins fame, may have been the inspiration for the Progressive Insurance spokeswoman of the same name.) Okay, so, Flo starred Geoffrey Lewis in a supporting role as a character named Earl. We always watched Flo, and I knew Earl well. But I failed to recognize Lewis as one of the vampires in the miniseries Salem’s Lot. Guess I couldn’t get past the glowing eyes and the fangs.

There comes this scene wherein vampire Earl is sitting in a chair, and he turns his head to look at the camera. Speaking to another character, it looks as if he is speaking to the viewer, i.e. he seemed to be speaking directly to ME. “Look at me!” he hisses. I almost climbed the back of the couch. Actually, I did climb the back of the couch. I ALMOST climbed up the WALL. “But that’s Earl!” my mother tried to reassure me. “You’re not afraid of Earl, are you?” Oh, hell yes I was. My mother intuited that it was now time for me to go to bed. Too late. That image was branded into my mind for eternity. 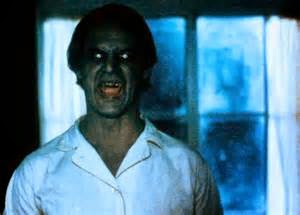 I would have been fine, though. I had no bad dreams that night. I would have forgotten about Earl the vampire with his glowing eyes; only we went to the grocery store the next day.


Remember that imagination I mentioned? It’s important. I was also in some ways a precocious kid. I knew, even at 5 or 6, that the news was real, whereas movies and TV were not. If it was on the nightly news, it was true. Likewise if it was printed in a newspaper. I think this was driven home to me on the day Elvis died. My mother cried upon hearing the news. I was confused, as she didn’t usually cry when someone died on TV. She explained to me, in language I could grasp, that those other deaths were fictitious. But Elvis had REALLY died. Thus the evening news was always real to me. Or more real, anyway.


(I also remember being terrified over coverage of the Atlanta Child Murders. Atlanta was a long way away, I knew, but I didn’t know HOW far, and what was to stop the killer from getting in his car and driving to MY house to get ME? That I was a white kid living way out in the countryside of rural Alabama, and thus probably in no danger from the Atlanta kid killer, that didn’t register.)


I did not, at that young age, understand what a tabloid was, or that tabloids are different than newspapers. They LOOKED like newspapers, didn’t they, especially the ones in black-and-white, like this one was, the one with the big bold headline VAMPIRES ARE REAL!!! And then in smaller print underneath it, VAMPIRES ARE ROAMING OUR STREETS—AND THEY ARE THIRSTY. Yup. That did it. A newspaper had said it; ergo it had to be true. Vampire Earl was REAL. Vampire Earl could come into MY bedroom window and get ME on any given night.


What followed were several WEEKS of me living in mortal fear of vampires. Lots of sleeping with the parents. I would cut little crosses out of cardboard cereal boxes, reinforce them with masking tape, and affix them to the walls of the house with thumbtacks. Not just in the bedroom I shared with my little brother, but all over the house. I would sharpen sticks to use as stakes. I had this one large piece of wood, about a foot-and-a-half long, sharp on one end, that I drew crosses on to lend it extra efficacy against the undead, and I actually slept with the thing! (I sure wish I’d kept it. I’d love to have it today.) And as if I wasn’t traumatized enough, somewhere in the midst of all this hysteria, either my parents weren’t watching or I snuck behind their backs or something. Anyway, I also saw DRACULA for the very first time. Because, y’know, vampire Earl wasn’t scary enough, with his orange eyes and hissing and all that. Noooo, I needed to top that, reinforcing my phobia by replacing vampire Earl with a far scarier, far more threatening Bela Lugosi.

When they’d focus on him, with his face largely in shadow but the light zeroed in around his eyes to make them seem to glow, and he would stare right at the camera, right at ME…Oh, snap.


Weeks beget weeks. My parents drew the line when I wanted to hang garlic up over all the windows.
“He ain’t never watchin’ another g*ddamn scary movie!” my father cursed.
“Well, YOU let him watch it!” my mother reminded him.
“I didn’t now he’d pull this $#it!” my father retorted.


Neither of them thought to blame the tabloid as much as, or more than, the movie. I’d taken one look at that headline and felt THE FEAR. You’ve all had the experience. It’s a primal, animal reaction to fear, this cold feeling that goes shooting through you. Left brain or right brain, I can’t remember which, but I’ve read about the sensation. It’s common to all human beings. You all know, it isn’t pleasant. You might feel it when you’re in a car wreck, right before you hit. That tabloid headline did it to me. And vampire Earl. And Bela Lugosi. I had a Dracula action figure, released in the early 80s, comparable in size to the original Star Wars action figures and doubtless intended for play along with them. (Drac and Darth Vader teaming up? Now THAT is scary.) 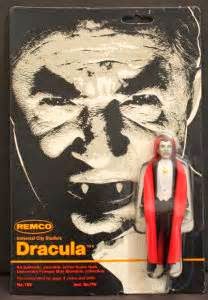 I took the action figure and destroyed it. Just LOOKING at it reminded me of my fears. I also threw away a copy of Marvel’s Dracula comic book I had in the house, and this kids’ magazine about monsters that featured Dracula. Yes, I was genuinely THAT disturbed.

Time passed. My parents relented soon enough. I went on to watch other scary films. None of them bothered me. My fear of vampires remained, though, for some YEARS. Then the most curious thing happened. As I grew older, that terror I had felt somehow became transformed into affection, then into love, a passionate love, for vampires in particular and for Dracula specifically. As profound and powerful as had been my fear, equally so, and moreso, became my love and devotion. I went from living in mortal fear that a vampire would come tapping on my bedroom window some night to a fervent desire that one would. Today, I’d give ol’ vampire Earl a hug, as a small child would embrace a teddy bear. And my love for the Count, the King of all vampires, is so intense that I went out a few years ago and got myself a Dracula tattoo. I wear a Dracula prop ring, an exact replica of the one worn by Bela and by Christopher Lee in the movies. I won’t even go into how many Dracula action figures I have (Yes, I replaced that one from my childhood. He stands now on top of my computer.), how many books I’ve read about him, how many of the movies I’ve seen. I wore a Dracula T-shirt and movie prop medallion to an awards banquet a couple of years back, where I won an award for my original play DRACULA: LORD OF THE VAMPIRES—which I dedicated to Bela Lugosi.


It explains a lot about me, doesn’t it, how I became warped in such a peculiar and wonderful way? I owe vampire Earl and Dracula a lot. And my parents, for being dumb enough to let me watch Salem’s Lot. (AT least when I saw Dracula, it was shown during the day. That fact may be the only thing that kept me out of an institution.)


These days, I hang welcome signs outside my windows instead of garlic. No, I’m not “Goth.” I don’t sleep during the day, believing myself to be, or playacting as, a real vampire. I don’t crave or drink blood. (Ugh. Gross, much?) And while I am all about freedom, and believe that what is done between consenting adults is patently their business, I’m not at all interested in the practices of real-life “vampires,” though I have met a few, and they seemed like nice enough people. But not until one of them turns into a bat or rises from the dead will they command the kind of fascination for me that does the vampire of Myth.


Note the use of the capital M for the word, there. To understand the difference between “myth” and “Myth,” check out the writings of Joseph Campbell. Myth is something profound and primal, as primal as that left brain or right brain stimulus of fear I described above. A “myth” is a made-up story. “Myth” is potent. Myth can bite you. It sure bit me.